Whether or not you’re an animal person, it’s hard to deny that most people consider their pets as part of the family. In fact, some owners treat their pets more like children than a furry extension of the immediate family.

Pet parents spent an estimated $32.7 billion on food and treats in 2018—with some owners even going so far as to pay for pet day care, pricey tech gadgets, and acupuncture.

People definitely love their pets, but how do our four-legged companions feel about us in return? For a closer look at who’s the better pet parent, we surveyed over 1,000 people. Keep reading to learn whether men or women think their pets are more attached to them, how often couples argue over pet-related responsibilities, and how many people modify their homes for the sake of their furry family.

It’s true that pets can’t verbally articulate how they feel about us when we say, “I love you,” but they do still have ways of showing us how much they care. When they climb up on the couch to cuddle, look at you for an extended period, follow you to bed, or greet you at the door, those are all signs of affection. 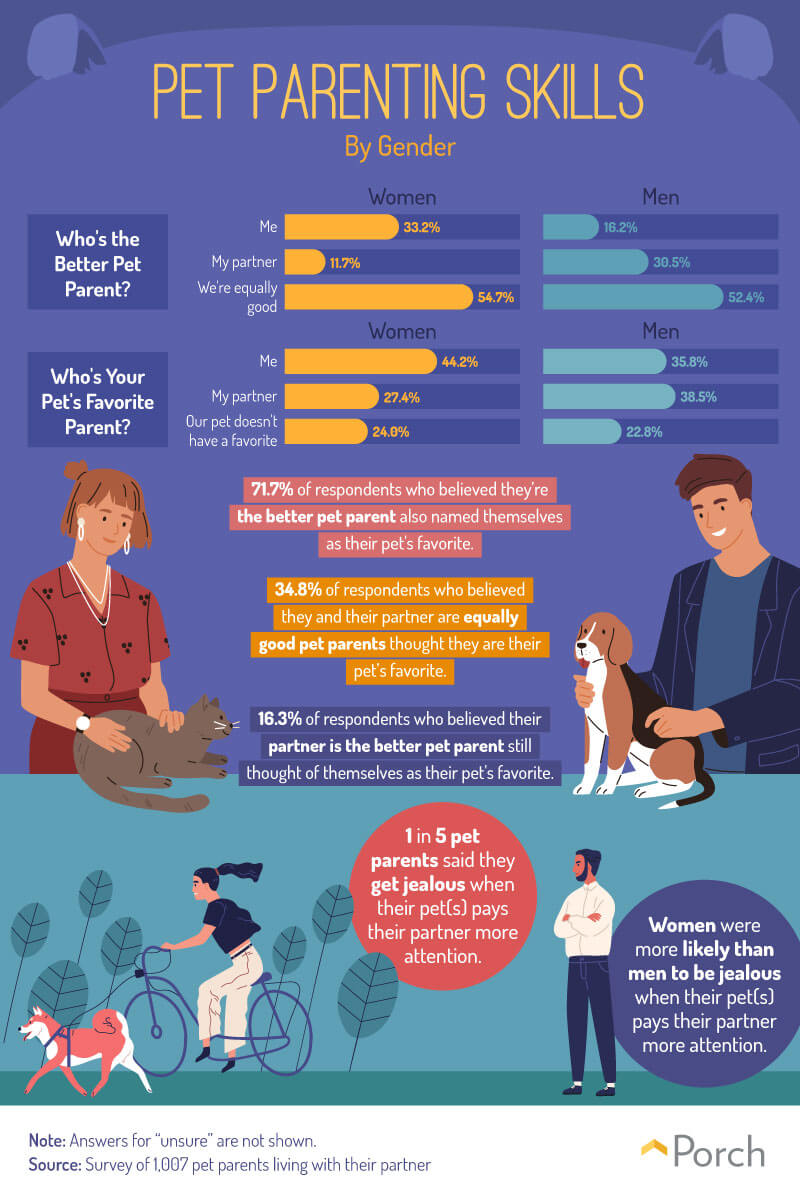 Of course, if you share your pet with the rest of the family, you might at least be curious to know who they love the most. While men and women largely believed they and their partner are equally good as pet parents, men were quick to point out their partner (31 percent) might be a better pet provider than they are (16 percent). Women (33 percent) also saw themselves as more likely to contribute to a pet’s well-being than their partner (nearly 12 percent).

On the matter of the favorite pet parent, women suggested they had the upper hand again. Compared to 44 percent of women who believed they’re more loved than their partner, just 36 percent of men felt the same. Less than 1 in 4 men and women believed their pets love both people in the relationship equally. However, 1 in 5 pet parents also admitted to getting jealous when their pets paid more attention to their partner.

Plenty to go around

Both partners likely love their pets equally. But when it comes to pet-related responsibilities, it might be a different story. Of the more than 1,000 people polled, women were twice as likely as men to say they do more for their pets than their partner. 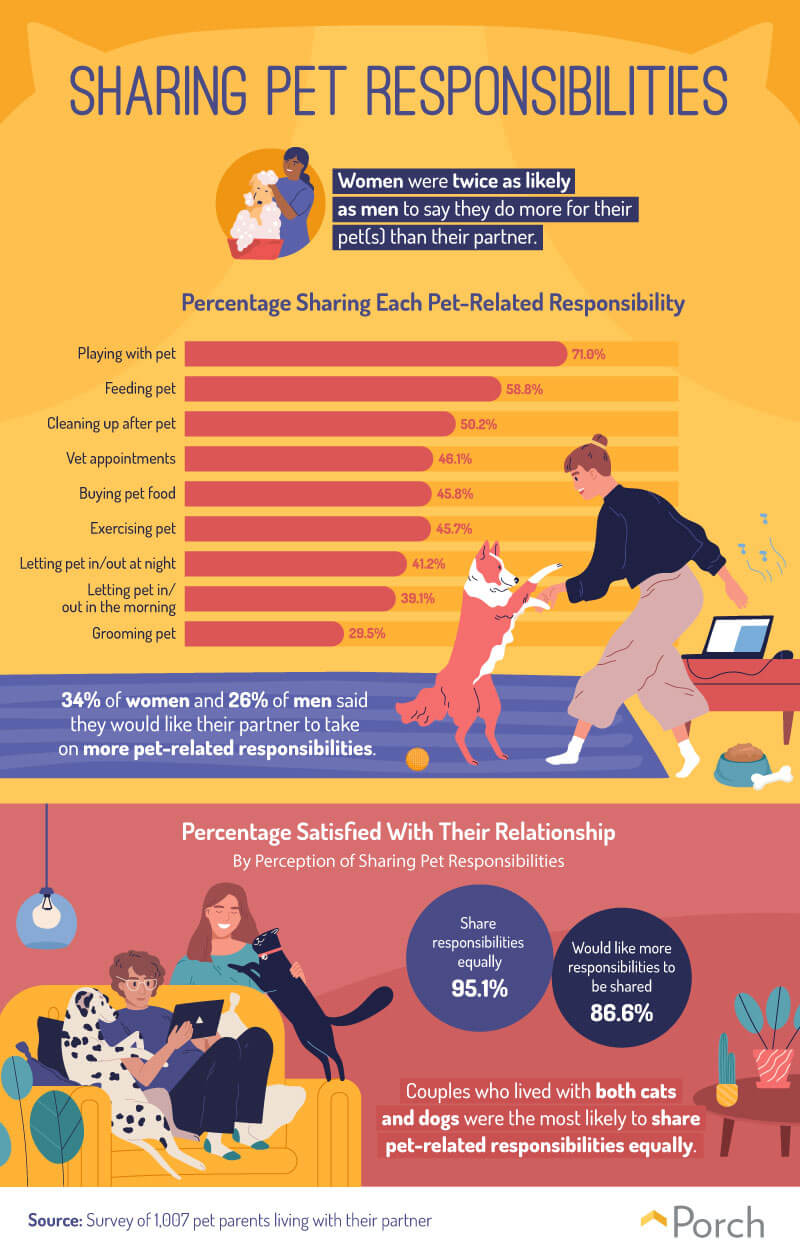 When asked about their shared responsibilities, playing (71 percent), feeding (59 percent), and cleaning up after the pet (50 percent) were the most likely to be fairly distributed. In contrast, couples were less likely to split grooming and letting the pet in or out in the morning and at night.

More than 1 in 3 women and 1 in 4 men agreed they would prefer to see their partner take on more pet-related responsibilities. As we found, couples who shared pet duties were more likely to be satisfied with their relationship (95 percent) than those who did not (almost 87 percent).

There are plenty of reasons why life with a pet is so much better than life without one. The unwavering devotion, constant companionship, and even extra physical activity all promote a healthier life. Owning a pet isn’t without its challenges, though, and deciding who should be responsible for what can occasionally cause strife between couples. 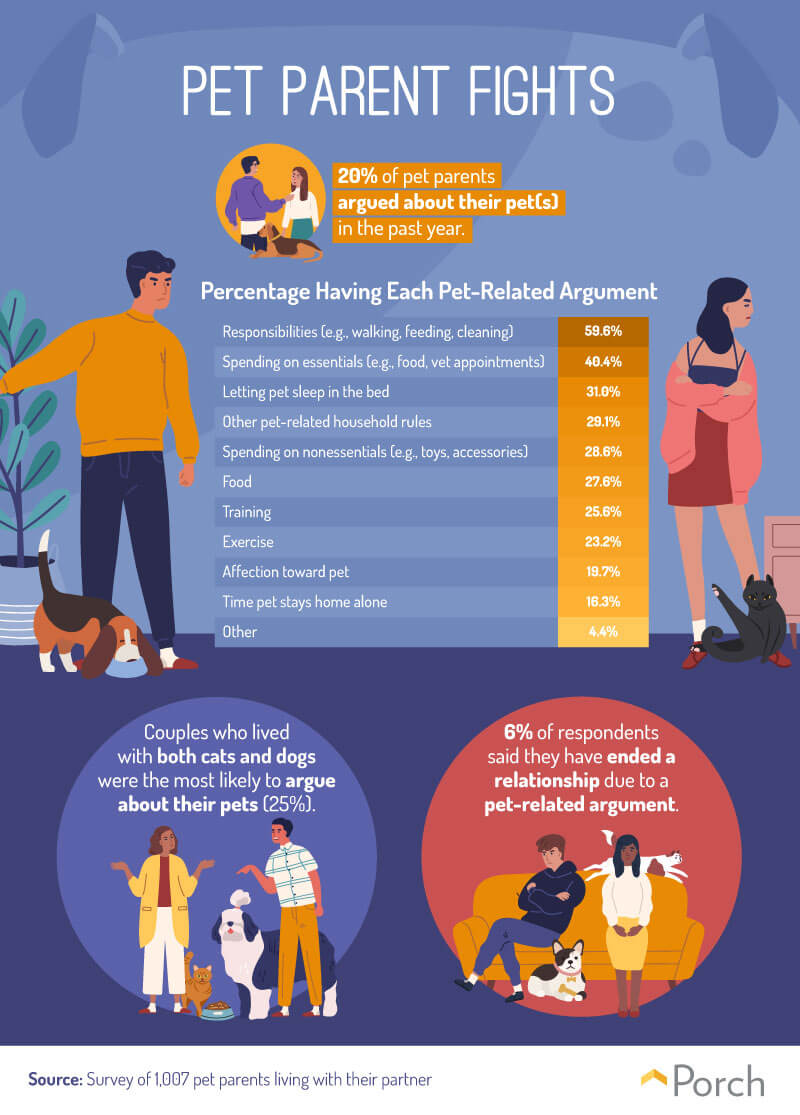 According to our poll, 1 in 5 pet parents admitted to arguing about their furry companions at least once in the past year. The biggest cause of these disputes? Daily responsibilities (60 percent), spending on essentials (40 percent), and letting their pet sleep in the bed (31 percent). Couples who had both cats and dogs were more likely to argue about their animals than those with only one type of pet. And another 6 percent of respondents acknowledged ending a relationship over a pet-related argument.

When you truly love your pet, you probably want them to enjoy your home as much as you do. Whether for older pets or to make getting around more convenient, more than 2 in 5 pet parents chose their home to accommodate their animals specifically, and nearly 2 in 3 added features for them. 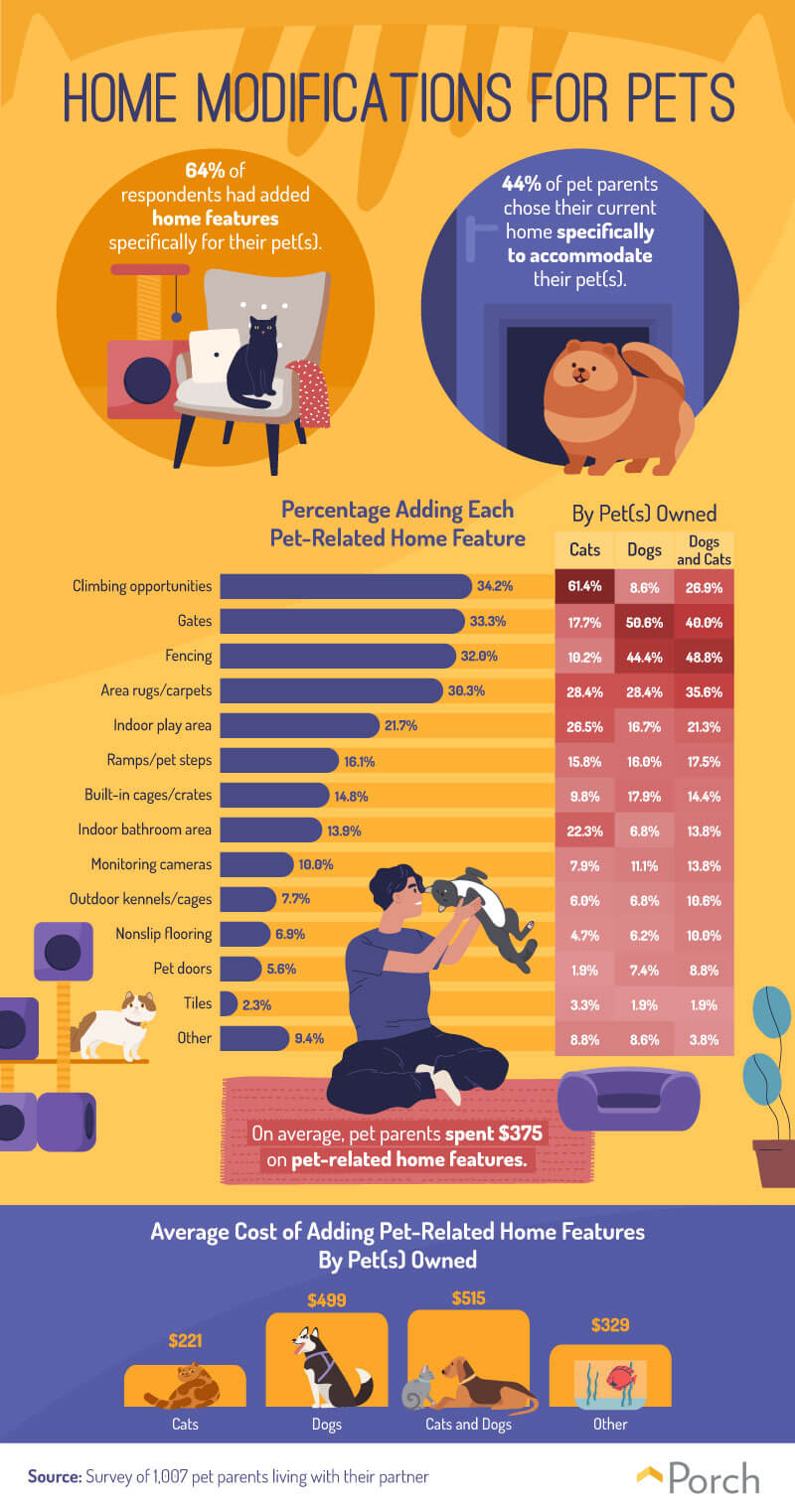 The most commonly added features were climbing opportunities (34 percent), gates (33 percent), fencing (32 percent), and area rugs or carpets (30 percent). On average, these added features cost pet parents $375, although costs were typically higher for people with just dogs ($499) or those owning both cats and dogs ($515).

There’s no denying that people treat their pets as if they were real people. From the ways we pamper them to the ways we travel with them, our four-legged friends have truly become members of the family. Unfortunately, owning a pet isn’t without its responsibilities, and how couples choose to divide those tasks can trigger arguments and even separation.

At Porch, we believe your home improvement projects should be stress-free—and that includes the ones you take on for Fido and friends. If you’re considering making improvements to your home to accommodate your pets, our team of Porch professionals is available to help get the job done quickly and exactly the way you want it. Start your project today, and learn more about our full range of services at Porch now.

For this project, we surveyed 1,007 respondents in a relationship who lived with their partner and had one or multiple pets. Respondents ranged in age from 19 to 76 with an average age of 38 and a standard deviation of 11.3. 554 respondents identified as women, and 452 identified as men. One respondent identified as nonbinary. 316 respondents had cats, 295 had dogs, 248 had both cats and dogs, and 148 had other pets.

Outliers have been excluded to determine the average cost of adding home features for pets.

These data are survey-based and depend on the self-reported recollections of respondents regarding their everyday life. Limitations with such data include telescoping, selective memory, and exaggeration. We did not statistically test our data, and our campaign is exploratory. The data were not weighted.

Are you a pet parent or want to share these findings on pet ownership in relationships? The graphics and information found on this website are available for use in any noncommercial capacity. Feel free to share them as much as you’d like across the web and on social media, but please make sure to link back to this page. Thank you!

Let Porch help you with your next home project. We have professionals across the nation.

Porch is a free home network where homeowners and home professionals can connect to get the job done. Whether you’re looking for a house cleaning or starting a major renovation, Porch is your destination for all things home. Learn More.

Check out more of our great Pet Parents Place blogs by clicking here.

Sign up to periodically receive our newsletter with upcoming events and tips.